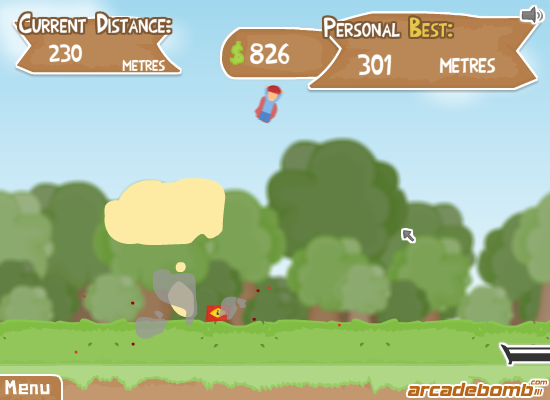 Send Captain Crash flying in this awesome side-scrolling launcher game! Look out for obstacles, some of them can send you flying and others will stop you dead. Rack up enough cash to upgrade your cannon, or hook up Captain Crash with some awesome apparel! Shoot for the stars and get each badge in the game!

Captain Crash is a collaboration with Chaz, an amazing artist and game designer. For Captain Crash we wanted to create a throwback to the classic “Kitten Cannon” from our younger years and pay tribute to the game that entertained us so much. Captain Crash was the result. 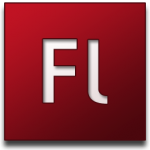 Captain Crash was developed fully in the Flash IDE. All art and assets were drawn in Flash by Chaz.

Captain Crash is a simple game, it involves a cannon that points to your mouse, and a charge amount. We wanted to create a way that was quick and easy to launch out character. What we did was allowed the user to have the ability to see the charge bar what holding the mouse button down and be able to move the mouse around. Sometimes it’s hard to tell what the launch vector will be for Captain Crash until the charge bar is drawn and gives a better idea of where Captain Crash will go.

For the collision, there was no reason to recreate the wheel here, so I opted to use ActionScript 3.0’s built-in collision tester, hitTestPoint. Since the game moves rather quickly, performing really precise collision didn’t make much sense, and was unnecessary.  Checking for ground collision is just a simple if statement and flipping the velocity with a damping amount (to eventually slow him to a stop).

We wanted to make some money off of this game, so we put the game on FlashGameLicense and waited to see if we could get any offers for sponsorship. We had a few people contact us about the game, but they weren’t impressive at all. We waited longer, and sure enough, we had an offer that was just right. We ended up making a deal for a Primary License of the game to ArcadeBomb.com.

ArcadeBomb had a request for us, it was to implement their highscore board, which we did, because highscores are awesome! Otherwise, Chaz and I went 50/50 on the initial sponsorship amount, and we still had the ability to sell non-exclusive licenses to other websites.